Prospects of Mathematics I 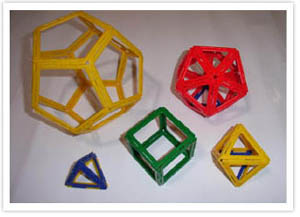 In this course, I would like to provide students who do not major in mathematics the opportunity, through relatively familiar themes (in this case, regular polyhedrons), to experience some basic ideas of mathematics- such as topology, discrete mathematics, theory of groups, etc. In addition, I aim to have the students get used to thinking from several different perspectives.

Unlike most mathematic courses, which science juniors take in the year, this course has few restrictions regarding its curriculum. Add to that the fact that most juniors do not possess adequate auxiliary mathematic ability, and the needs to provide them with a glimpse of the most up-to-date mathematical topics I could offer-while making it simple enough so all could understand, I settled on using regular polyhedrons, a relatively old and well-known topic.

Still, considering that some couldn't imagine the shapes of the five regular polyhedrons that exist, that some didn't even realize this fact, the topic itself may have been a good choice after all.

In the lectures, I had several opportunities to use OHPs (OverHead Projectors) to explain mathematical theories and formulas. In the case of lectures concerning mathematics, using the device is not common; as such lessons necessitate writing notes while listening to the instructor. However, to appeal to the students visually, bearing in mind the visual properties of this course, I decided to use the projectors.

The final assignment was to create an original mathematic problem. Hopefully, by understanding the difficulty of creating them, the students have impressed upon themselves the importance of these theorems. While some of the problems were merely adaptations of the theorem, at least the students seem to have understood what I had expected of them. An interesting note was that some students, while doing some background research on the Internet for the assignment, realized that some of the keywords introduced in the lessons had close ties with surprisingly elementary themes and mathematic adaptations.

The aim of this course is to provide the opportunity to get a feel of some of the mathematical ideas through concrete themes like regular polyhedrons.

The first half of this course will be dedicated to looking at these polyhedrons from a topological point of view. Regular polyhedrons are also known as "Plato's solid" and have been known for a very long time. These shapes can be considered a special case of convex polyhedrons. Among the many mathematical formulas, Euler's formula for convex polyhedra is famous for revealing the relations between the number of points, edges, and faces on a convex polyhedron. Using formulas as the aforementioned Euler's, we'll begin with the classification of regular polyhedrons. We also hope to delve further into mathematics by looking at Euler's formula from different perspectives.

In the second half, I intend to use the idea of groups to better understand the many symmetrical properties that many regular polyhedrons have.

Finally, in the end I'd also like to introduce to you how regular polyhedrons blend in with many areas of mathematics using a unique response called the Mckay correspondence.

In the latter half, we'll study the idea of group theory through the symmetric group of regular polyhedrons. Also, we'll look into such topics as the Euclidian algorithm and Galois theory.

Senior-high mathematics would be adequate for this course.

A word of advice

Since this course focuses on concrete themes, it may be useful to put your hands to good use. I especially recommend that you build your own models of polyhedrons as it provides views of polyhedrons that cannot be seen on paper.

The classes will begin at 8:45. Handouts will be given at the beginning of each class. Also, I expect to give out mathematical exercises during the lessons, and I hope that you will work on them and further your understanding.

The first assignment paper aims to give students the chance to put into context some of the theorems they have learned in the lessons. In a way, this is my response to the fact that less people are taking notes during the lessons every year.

In the second paper, students are to solve mathematical problems by themselves. This can be considered 'a standard assignment paper'.

The third assignment is to create a mathematical problem. This assignment puts emphasis on independence as it allows the student to do research and create problems freely. Therefore, copy-and-paste problems from the Internet will not be accepted and no score will be given.

No. 2 What is a Regular Polyhedron? (Euler's formula for convex polyhedra)

No. 3 Other Forms of Regular Polyhedrons (A soccer ball and regular icosahedrons)

No. 4 Characterizing the f-vector of polyhedrons

(Do polyhedrons with a given number of points, edges, and faces exist?)

No. 5 The Simplicial Complex (and its relation with the development of a polyhedron

No. 6 The Euler Number of closed polyhedral surface

No. 7 The Euclidian Algorithm (calculation methods of GCD)

No. 8 Symmetry of Regular Polygons

No. 12 Conclusion on Regular Polyhedron Groups

No. 14 Solving Quadric Equations, an Introduction to Galois' Theory

Evaluation will be based primarily on three papers assigned over the course of the lessons. Attendance will also be taken into account.

The second paper consists of a mathematical problem on the polyhedron group and the Euclidian Algorithm. One focal point will be whether the students are able to put the theories they have learned into good use.

The third paper will be on creating an original mathematic problem including some of the keywords the students have learnt over the lessons. Sample problems made by the instructors are also accepted.

The papers will be graded into three evaluation levels. Those with high overall performance, plus good attendance will be graded as "Excellent". Minimum conditions for acceptable grades will be the filing of at least two of the papers. Please bear in mind that those with poor attendance records will be graded comparatively lower.