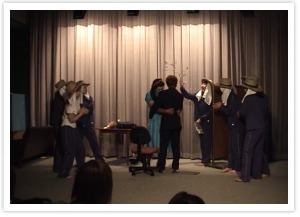 Students taking this course perform an English play. Through making scenarios and reciting lines, students will improve their English skills actively and enjoyably. The aim of this class is not only to get used to speaking English and to develop the expressive verbal ability, but also to cultivate cooperation and creativity through making a play with the group members.

I basically leave things to students' autonomy. I let each group choose the company name and do things by themselves as a theatrical company. The leaders who are chosen by the group members take responsibility to the progress of discussions. In addition, each group has a secretary and an accountant. Each student takes responsibility to each role.

Each group makes a list of members. It helps group members make contact with each other outside the classroom. If there is a student who does not show up in the classroom for several weeks, one of the group members make contact with him/her and encourage him/her to come to the class. Usually, many of the groups get together outside the classroom and practice their play before the final week. Students can send emails to me to make a reservation for using a studio at anytime.

Each group prepares a notebook and the secretary keeps records of the class activities. It includes attendance sheet and an account book to keep receits and expenses. Each group needs to hand in the notebook in the end of each class. By checking the notebooks, I grasp what each group is doing. I write some comments and give it back to each group in the beginning of the each class meeting. ###Student's Accomplishments

The contents of this course

In this course, students are divided into three groups. Then each group makes an English play and put it on the stage. This course begins with writing a script in English and then improves English ability through memorizing lines and having a rehearsal. In rehearsals, students cultivate not only the natural English pronunciation, intonation and rhythms, but also the skills of expressing their feelings in English though acting the characters with various emotional attitudes in the play. Moreover, students prepare for costumes, sound effects, light effect, stage settings and properties in order to make the plays have presence and be genuine as much as possible. In the final week of this course, the plays from three groups are going to be on stage. In the end, we are going to decide by vote the prizes for the best leading actor/actress, the best supporting actor/actress, the clearest pronunciation, the best script, the best direction and the best play and make an award ceremony for those prizes.

Copies are distributed to students in class.

All files are in Japanese.

Students are given grades depending on your plays. As a general rule, all your group members get the same grade.