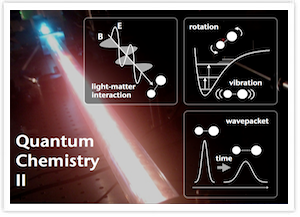 To reveal how matter interacts with light is one of the central questions of science, the investigation of which has laid the foundation of various branches of modern science, including quantum mechanics. Among these, the developments in spectroscopy, which captures the state of a material by observing its response to the change of light parameters, such as wavelength etc, played a major role in the development of material science. In this course, we will learn what kind of information can be derived from molecular spectra by studying the interaction of molecules with light and quantum mechanics of nuclear motion.

Taking some fundamental laws as a starting point, we will consider what kind of information can be revealed about molecules by deducing how to process a simple quantum system, the interaction of molecules with light. To make the logical steps clear, the derivation of the equations will be explained using the blackboard. The lectures will be conducted giving special consideration in order to make imagining the phase of a molecule living in the quantum world possible.

I. Light and Molecules

It is highly recommended that you take the course "Quantum Mechanics I" beforehand.

Evaluation will be based on reports and assignments.