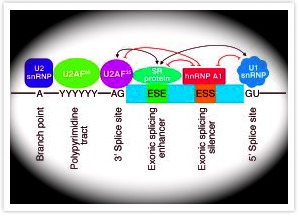 “What are we?” “Where do we come from?” These questions are as old as time itself, fundamental and universal in nature and traceable back to the days of Ancient Rome and Greece. The primary target of the medical sciences that we pursue is human disease, but the ultimate goals of our studies are to learn and elucidate what we humans are made of at the molecular level and how diseases compromise molecular structures and interactions that are precisely organized.

Based on the knowledge acquired in biochemistry, this course aims to answer questions like, “What are genetics?”, “What are genes?”, “How is gene expression controlled?”, and “What is happening in genetic diseases?”

With the completion of the Human Genome Project in 2003, the genes that constitute our bodies have been identified. However, the entire DNA sequence has yet to be fully decoded. No one is sure which regions of the genome are transcribed at which developmental stage in which cell types or tissues in order to perform functions assigned to the encoded molecules. In this course “Genes and Genetics”, we will learn about the regulatory mechanisms of gene expressions and their aberrations, both of which are still being intensively investigated. In addition, the genetic bases that make humans as diverse –sometimes changing the way one is susceptible to a particular disease - as we are.

De novo sequencing of novel species – like the Human Genome Project – is becoming more and more active, and with the advent of high-throughput sequencing machines, it will not be long before the entire genome is sequenced on a personal level. While at this moment the majority of nucleotide sequences that constitute our genome are nothing more than a mind-boggling array of code which hardly make any sense, functional characterizations of coded molecules, as well as regulations of gene expressions, are advancing. Moreover and hopefully, research will soon involve the functional characterization of non-coding regions that make up 98% of the human genome. In both medical research and clinical medicine, I believe that the knowledge of cytogenetics, molecular genetics, and molecular bases of monogenic and multifactorial diseases will become more important and more essential in the future.

By using videos and introducing a genetic perspective of the latest news in the lectures, I hope to make the topics easier to understand. On the other hand, as cutting-edge genetic research does not require the translated Japanese words, English words are mostly presented in the lectures. It is rather tough, but it is my wish that, some of the students will, having acquired knowledge of leading-edge research in the field of genetics through this course, one day grow up to be world leaders in this newly rising field of medicine.

The following books are recommended for this course:

Both books can be viewed free of charge at http://www.ncbi.nlm.nih.gov/books.

The following books are recommended for study:

This Course, ‘Genes and Genetics’ is composed mostly of lectures, leaving no time for active participation of the students (student presentations, for example). The following are sample questions from the 2007 year examinations. The questions may offer a glimpse of what we expect the students to acquire in the course.

Note: All files are in Japanese.

Evaluation will be based on attendance and the end-of-term examination. A 50% attendance rate or better is necessary to earn credit.